The Kroussou Project is a large scale, near surface zinc-lead project with exploration to date validating province-scale base metals potential.

The Kroussou project is located in south-west Gabon on the central west African coast. The project exploration permits, 100% owned by Apollo Minerals, is approximately 220km south of the capital Libreville within the Ngounié Province.

The Project consist of two exploration permits (G4-569 and G4-456) which cover 2,363km² and have 135km of strike length along the prospective contact between the Cretaceous Cotier Basin to the west and Archean/Proterozoic basement to the east. 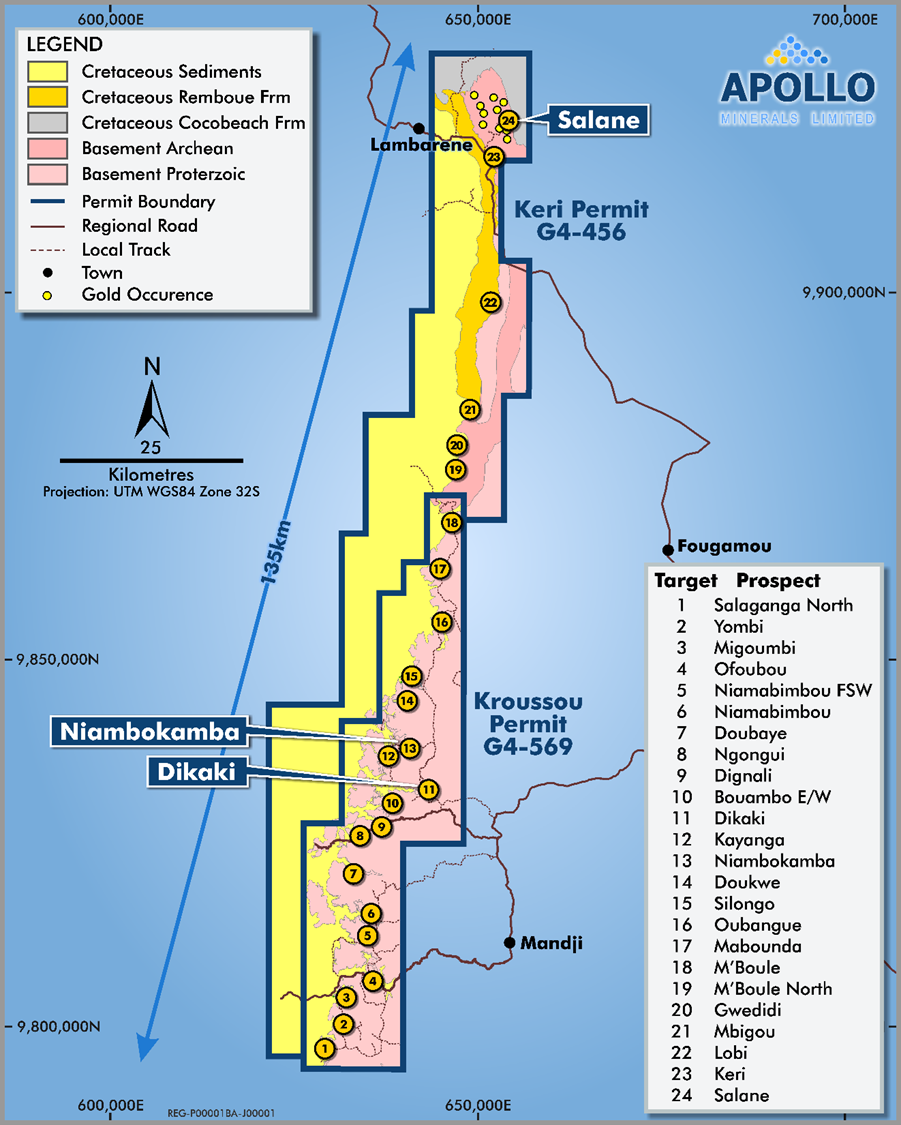 Gabon is a mature mining jurisdiction and as such, has a supply of labour that is used to support exploration and mining operations. Of late, there is a growing influx of Australian listed companies in the region. 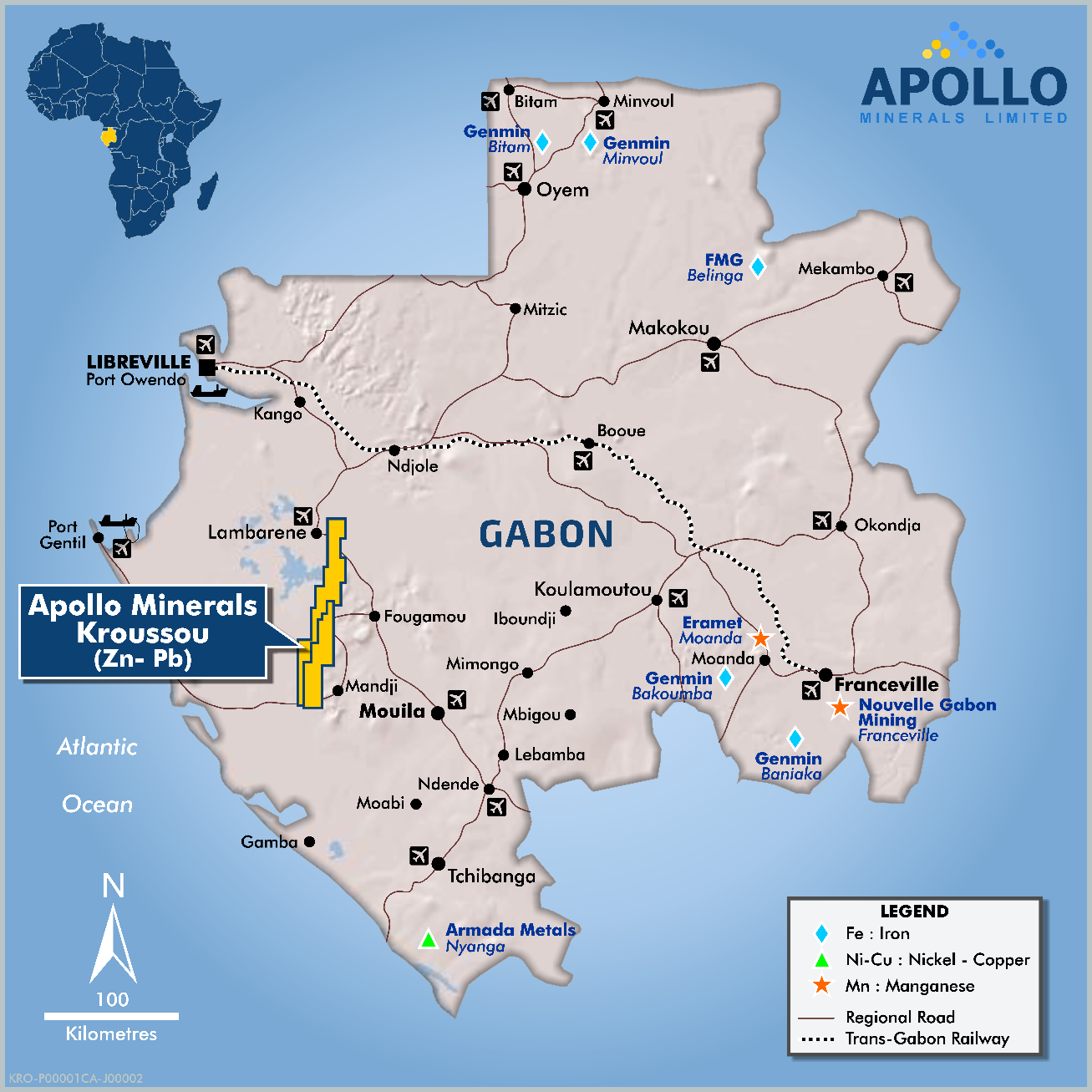 Figure 2 – Location of Kroussou in Gabon with regional transport infrastructure

At the Kroussou Project, zinc-lead mineralisation is hosted in Cretaceous sediments on the margin of the Cotier Basin within preserved channels lying on unconformable Archaean and Paleoproterozoic basement rocks (Figure 3).

Exploration work carried out by previous operators identified 150 base metal occurrences along a +70km strike length of prospective geology within the project area. The zinc-lead mineral occurrences are hosted within exposed channels that offer very shallow, near surface targets close to the Archaean and Paleoproterozoic basement rocks. Only two of the 18 exposed channels were partially drill tested by the Bureau de Recherches Géologiques et Minières (BRGM) historically, with both channels containing significant base metal mineralisation.

As discussed below, a further two near surface targets were drilled by Trek Metals, which also returned significant zinc-lead intervals, further validating the province scale, base metal potential of the project area.

There are multiple opportunities for the discovery of further base metal mineralisation within the remaining untested 20 channels and also further exploration westward within the broader Cotier Basin is warranted with the expansion of area including the Keri permit.

PREVIOUS WORK ON THE KROUSSOU PROJECT

Intermittent exploration was carried out on the Kroussou Project between 1962 and 1980, primarily by the BRGM, with latter work in partnership with the Gabonese Government organisation known as COMILOG. The BRGM carried out surface geochemistry comprising soil samples (on a grid of 50 x 50 metres), rock chip sampling (largely along the drainage network where exposures are most prominent) and minor stream sediment work, focusing largely on regional targets.

Some geophysics, including ground based induced polarization and electromagnetic programs, were completed in order to identify any potential near surface mineralisation. As a result of the compilation of the data received from this work, significant near-surface base metal mineralisation was identified where drilling was carried out. This drilling was limited to a small portion of the target area.

Approximately 400 very shallow holes (average depth of 16 metres) were drilled by the BRGM; of which most were either partially sampled, or totally unsampled.  The majority of the BRGM drilling was carried out on the Dikaki Prospect (Figure 1 & 3). Numerous shallow intersections of ore grade and width lead and zinc mineralisation were returned.

At the time, the BRGM were focused predominantly on the potential for lead and therefore did not fully explore the zinc potential which is today considered highly prospective.

The BRGM drill holes confirmed multiple horizons of flat lying mineralisation. Numerous intersections of massive sulphide were reported adding to the potential for significant zinc-lead mineralisation at the Kroussou Project. 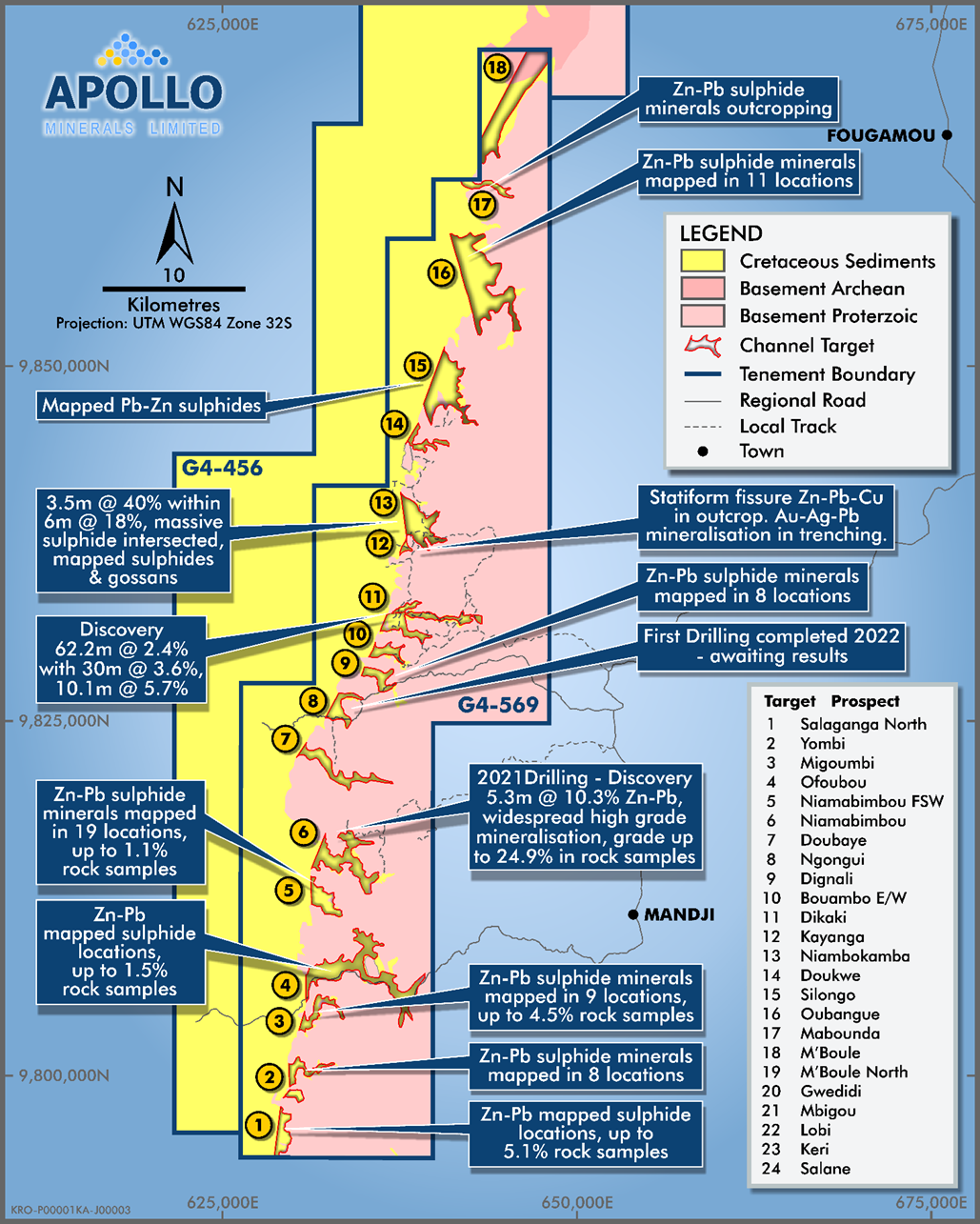 This hole, NKDD001, was targeted at the southeastern end of a high order soil anomaly and is open.

Since entering the joint venture agreement with Trek Metals in 2020, Apollo has completed two drill programs, 2021 & 2022, and continued with the regional airborne geophysics, mapping and geochemical soil sampling across the Kroussou Project.

Regional mapping completed in 2021 and 2022 has targeted the southern areas including Salaganga North, Ofoubou, Yombi, Niamabimbou, Bouambo West and Niambokamba. Mapping has extended current known embayment systems with sulphide mineralisation mapped in outcrop at all areas. Rock chip sampling in the Salaganga North prospect returned grades of 2.12 and 5.18% Zn+Pb and 1.51% Zn+Pb at Ofoubou. These mineralised samples were taken from sandstone and siltstone outcrops with visible galena and sulphides.

Significant drill intersections from the drilling include the following:

In 2022 Apollo completed 79 line kilometres of passive-seismic surveys and an extensive helicopter airborne electromagnetic (AEM) survey that covered the entire 80km strike of the Kroussou exploration permit. With line spacing of 200m over the main basin contact and 100m over the embayment prospects.

The AEM survey has been successful in identifying the embayment-style targets, identifying structural targets and is being used to further aid exploration in the Kroussou permit. Figure 7 shows the preliminary AEM results in the Niambokamba area with the recent drilling and a new embayment defined. 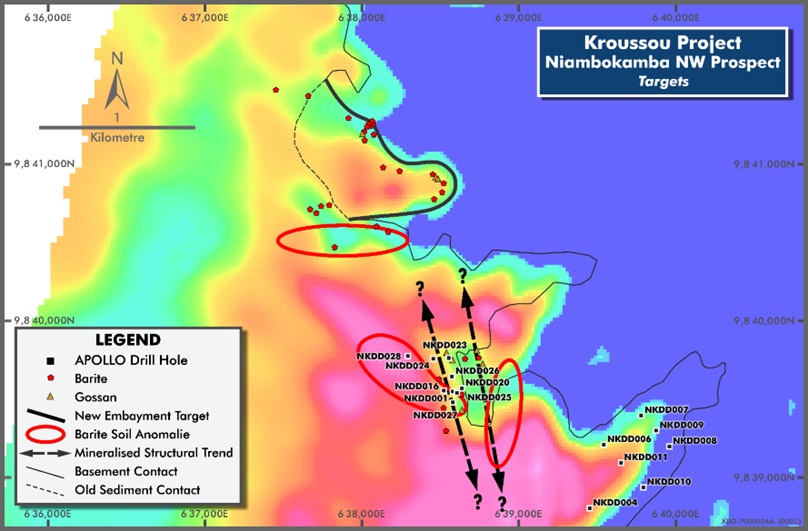 The current geological and mineralisation genetic model is summarised in Figure 8 as a hybrid Mississippi Valley Type (MVT) model whereby circulating fluids from the basin sediments and possible basement rocks leach metals via oxidised fluids and react with either reduced fluids from the surface water or organic matter within the sediment pile to drop out the mineralisation. Due to the structural architecture of the basin, structural control of mineralising fluids may be preferentially focussing base metal mineralisation into structural fault/breccia-controlled locations as noted at Niambokamba. 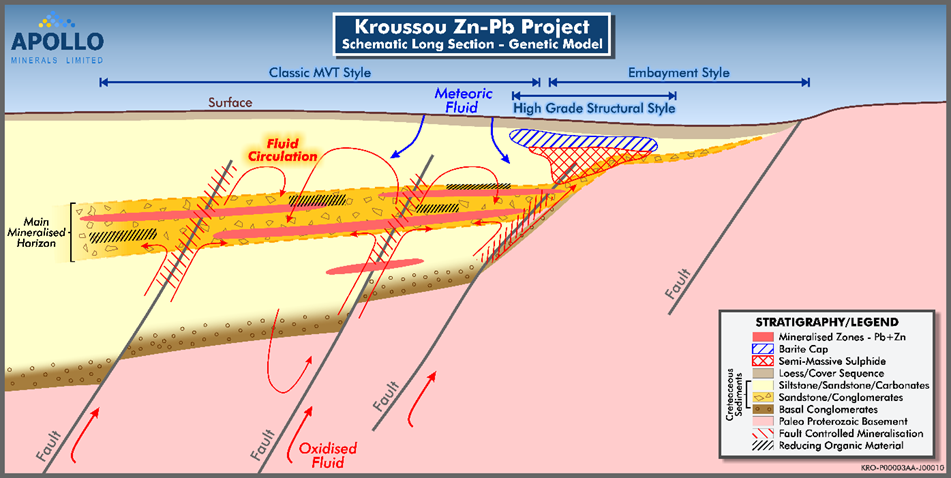 The future work programs at Kroussou will aim to expand the broader exploration footprint, in addition to field work to test and further define the Company’s recently announced initial Exploration Target region. These activities are intended to include:

The Company will undertake the work program with a strong commitment to all aspects of sustainable development and responsible mining, with an integrated approach to economic, social, environmental, health and safety management.